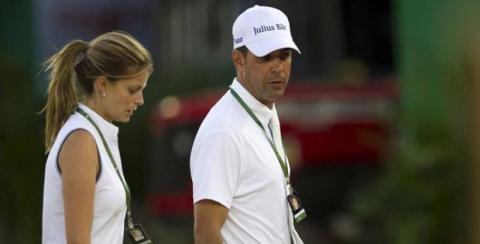 The British newspaper Daily Mail claims that the heiress of Greek magnate Aristotle Onassis, Athina Onassis, decided to divorce Alvaro de Miranda Neto, known as ‘Doda,’ after he was caught cheating on her with the sister of an international equestrian.

As the article says, Doda was found in bed with the blonde at the $2 million home that Onassis bought in Wellington, Florida, just last year.

The newspaper says that it has learned that Doda was discovered in bed with the woman by his wife’s security team.

‘Athina’s security detail is paid by her not him. They busted him having sex with another woman in the couple’s new house in Wellington,’ a well-connected member of the international show jumping circuit told Daily Mail Online exclusively.

‘He begged them not to say anything, but one of them went straight to Athina. She immediately packed her bags and went off to Europe.

‘This has been the buzz in Wellington for about a month,’ said the source adding ‘It was apparently a one-night stand, there was nothing serious going on between them.’

However, it seems that Doda is determined to win her back. ‘I am really in the midst of a storm,’ he admitted to Brazilian magazine Epoca, ‘But I will not give up on my love.

‘It won’t be easy but I will fight until the end.’