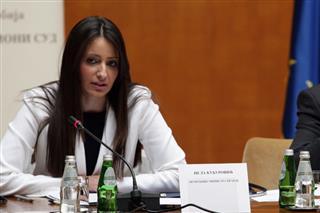 BELGRADE - Minister of Justice Nela Kuburovic said Wednesday at a meeting with the Head of the EU Delegation to Serbia Michael Davenport that the main future priorities of the Ministry will be consistent implementation of the Action Plan for Chapter 23, with emphasis on improvement of judicial efficiency.

Davenport announced that European Commission officials will visit Serbia in early October, which he said will be a chance for Serbia and the EU to define and understand future steps well, the Ministry said.

Kuburovic informed Davenport that Serbia had started the implementation of the Action Plan before the official opening of Chapter 23.

She announced that a set of judicial laws, as well as laws on the fight against corruption and domestic violence, on free legal assistance and the anti-corruption agency will soon be tabled to the parliament.