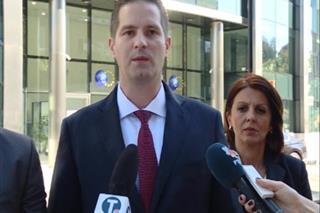 BRUSSELS - Kosovo Minister of Administration and Local Self-Government Ljubomir Maric unveiled in Brussels Thursday the steering team set up to establish the Community of Serb Municipalities.

The team is comprised of representatives of Serb municipalities in northern and southern Kosovo - Igor Kalamar, Dejan Radojkovic, Vinka Radosavljevic and Svetislav Durlevic.

The steering team was appointed by the Pristina authorities last week to urgently start working on the statute and the establishment of the Community.

"This time, the process is starting with full support from the Pristina government and all relevant political factors, which is very important for us so that we can, at last, deal with the expert part of the work - the Statute and implementation of the first six points of the Brussels Agreement," said team coordinator Maric, but declined to give...