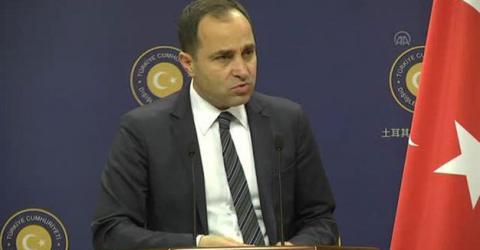 The results of the Russian parliamentary elections in Crimea were not legally valid in the eyes of Turkey, Foreign Ministry spokesperson Tanju Bilgiç said on Sept. 23 in a written statement.

Turkey continued to support the territorial integrity of Ukraine, including the Crimean peninsula, said Bilgiç, adding that the weekend's elections were considered within this perspective.

On Sept. 18, Russian parliamentary elections included Crimea for the first time since the peninsula was annexed from Ukraine in 2014.

Russian state media reported turnout of over 80 percent for that vote, with more than 90 percent allegedly opting to break away from Ukraine.

Crimea was formally annexed by Moscow after an independence vote on the heels of violent anti-government protests in Kyiv that led to the overthrow of then-President Victor Yanukovych.

Turkey did not recognize the Russian annexation of Ukraine's autonomous republic of Crimea in 2014.
Turkey, a NATO ally, says that 12 percent of Crimea's population is Turkish-speaking Tatars who are Sunni Muslims, like the majority of Turks.