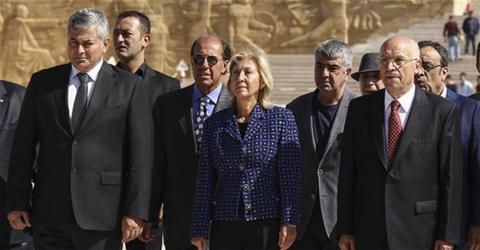 President Recep Tayyip Erdoğan's suggestion that the Treaty of Lausanne, which largely gave Turkey its present borders instead of the rump state envisioned in the Treaty of Sèvres, was "presented as a victory" has drawn an angry reaction from the Republican People's Party (CHP).

Pointing to the historic significance of the treaty, CHPAnkara deputy Gülsün Bilgehan said Lausanne was the title deed of the Turkish Republic.

"Erdoğan can learn the importance of Lausanne from the cabinet meetings which he chairs these days. Because Lausanne is the title deed of the Turkish Republic and a certificate of honor for those who signed it as Mr. Erdoğan said in his message. In his speech today, he said 'They cannot make us take one step back even if the whole world comes together.' I invite him to read a real history book based on documents telling about Lausanne and İsmet Pasha [İnönü] to learn how it was made," Bilgehan said in a written statement.

Bilgehan is also the grand-daughter of Turkey's second president İsmet İnönü, who was the chief negotiator of the Turkish delegation in Lausanne
In addition, CHP Istanbul deputy Gürsel Tekin also condemned the president's remarks on Lausanne, describing  them as a "great shame."

"I listened to Mr. President in dismay. It is extremely saddening that he disregarded a significant process such as Lausanne. The fact that he brings an important victory up for discussion is a great shame and I strongly reject it. I evaluate it as very inappropriate," Tekin said.

Meanwhile, CHP Istanbul deputy Mahmut Tanal stated that discussing the Treaty of Lausanne amounted to saying "yes" to capitulations and colonialism, adding that Turkey would have ended up like Syria, Afghanistan or Pakistan without...