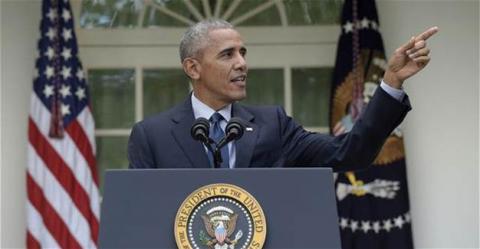 The landmark Paris agreement on climate change will enter into force on Nov. 4, after a coalition of the world's largest polluters and small island nations threatened by rising seas pushed it past a key threshold on Oct. 5.

U.S. President Barack Obama hailed the news as "a turning point for our planet," and U.N. Secretary-General Ban Ki-moon called the agreement's strong international support a "testament for the urgency of action."
Katharine Hayhoe, a climate scientist at Texas Tech, called it: "A moment of bright hope in the increasingly discouraging landscape of climate science."

U.N. deputy spokesman Farhan Haq said late Oct. 5 that the European Union and 10 countries deposited their instruments of ratification. The percentage of emissions they account for topped the 55 percent threshold needed for the treaty to take effect, he said.

"I am delighted to announce that today the Paris Agreement will cross the second and final threshold needed for entry into force, and will enter into force on 4 November 2016," Ban said in a statement issued from Europe.

"Global momentum for the Paris Agreement to enter into force in 2016 has been remarkable. What once seemed unthinkable is now unstoppable. "

The deal takes effect 30 days after 55 countries, accounting for at least 55 percent of global emissions, have adopted it. Sixty-two countries had done so as of Oct. 4 but they accounted only for about 52 percent of emissions.

A U.N. website said that as of the Oct. 5 afternoon 73 of the 197 parties to the treaty, accounting for 56.87 percent of the world's greenhouse gas emissions, have...