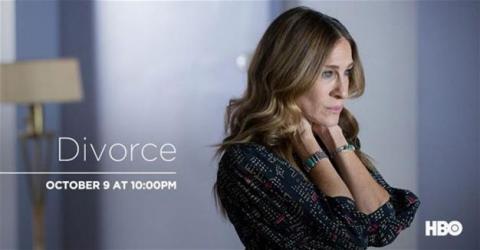 In August 2000, a Time magazine cover story touting singles life displayed Sarah Jessica Parker and her three "Sex and the City" co-stars with the headline: "Who Needs a Husband?"
That question could apply, in spades, to Parker's new HBO comedy, a piercingly honest yet droll exploration of a marriage on the rocks titled, brazenly, "Divorce."

Premiering on Oct. 9, "Divorce" returns Parker to series TV in a role that will inevitably be judged against her "Sex and the City" portrayal as self-described "sexual anthropologist" Carrie Bradshaw. "Divorce" reintroduces the actress as Frances, a suburban wife and mother gazing into the bathroom mirror in the series' first scene as if to wish away encroaching signs of age, whereupon husband Robert (co-star Thomas Haden Church) interrupts to beef about how Frances hogs the bathroom.

Then, his back turned to exit, Frances, fuming, flips him a bird. With that fed-up move, Parker leaves Carrie Bradshaw far behind.

"I just improvised that," says Parker, looking pleased. "I'm so glad they used it!"

But make no mistake, very little about "Divorce" wasn't carefully thought out, if you believe Parker. She says she and producing partner Alison Benson spent four years crafting the show's concept while recruiting other off-screen talent that includes series creator Sharon Horgan and showrunner Paul Simms. Then they mobilized a supporting cast including Molly Shannon, Talia Balsam and Tracy Letts.

It all adds up to a project Parker was, well, married to - and not as an acting showcase for herself; at first, she had no plans to appear in it.

What made it so important to her?

"A lot of people I knew were at a very interesting point in their relationship," she explains. "It's...

Economic confidence in Turkey jumps in May

US protests for second night over police killing of black man