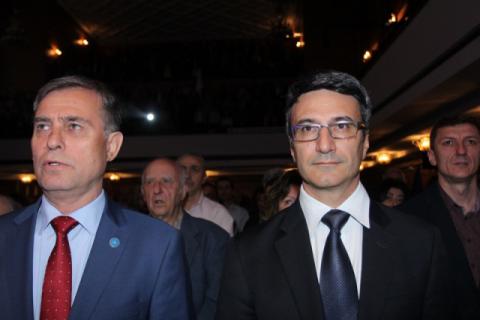 Novinite publishes profiles of presidential candidates running in the forthcoming elections on November 06.

The last one who will have a separate profile is former Economy Minister Traycho Traykov, the candidate of the Reformist Bloc coalition.

„Never before has it been so important who will be President," Traycho Traykov, a former minister and presidential candidate in the 2016 elections, told private bTV station in March.

Six months later, he was nominated for President by the Reformist Bloc (RB) a loose coalition of centrist and right-wing parties which is the junior partner in Bulgaria's coalition government. The announcement of his candidacy was not unaccompanied by tensions amid the RB's "heavyweight" parties: the Union of Democratic Forces (UDF), Democrats for Strong Bulgaria (DSB) and Bulgaria of Citizens Movement (DBG), which have long been involved in a battle for dominance within the bloc.

The UDF, shortly after supporting his candidacy, backtracked, putting forward the name of Grozdan Karadzhov, a member of the RB's Civic Council. The decision was a blow to DBG, which deems the Civic Council irrelevant to decision-making. Traykov - whose affiliation to the RB began as he entered the bloc's Civic Council (a watchdog body whose consultative function is downplayed by some of the parties) in 2013 - does not enjoy wide support within the UDF, as he called on the party's leader Bozhidar Lukarski to withdraw his nomination for Economy Minister in 2014 as it had not been councilted with the council.