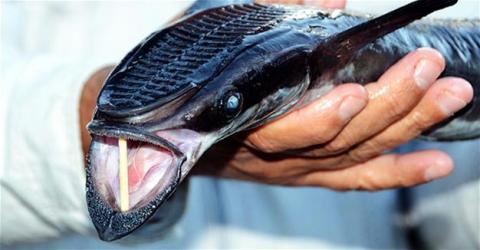 A fisherman living in the Aegean province of Muğla caught a rare sharksucker fish, also known as a remora, on Oct. 19, Doğan News Agency has reported.

Locals in the Bodrum were shocked at seeing the animal which normally only lives in the tropics.
The rare fish was caught by 54-year-old amateur fisherman Mustafa Yıldızhan off the Yalı neighborhood of Bodrum.

Yıldızhan said he had never seen the fish before in the region. "I have been fishing here since I was 10 years old. I have not seen this fish before. I showed this fish to all the fishermen I know. But they also didn't recognize it. We thought it had been poisoned. There were marks on the back of its head and it seemed to have been stepped on. We were shocked when we saw it," he said.

A board member from the Chamber of Shipping in Bodrum, Cpt. Arif Yılmaz, also said they had seen the fish for the first time in their seas.

"It might have come here by clinging to whales, sharks or big ships with its suckers, from hot seas such as Gibraltar or the Red Sea. It does not live or breed in our seas. … So the locals were shocked by the incident. We talked about examining the fish with academics working in the Aquaculture Faculty at Muğla Sıtkı Koçman University. We sent it to the aquaculture museum for exhibition. We have not had this kind of fish in our museum," Yılmaz said.

Remoras, also called suckerfish, are a family of ray-finned fish in the order of Perciformes. They grow to 7-75 cm in length, and their distinctive first dorsal fins take the form of a modified oval, sucker-like organ with slat-like structures that open and close to create suction and take a firm hold against the skin of larger marine animals. By sliding backward, the remora can increase the suction,...