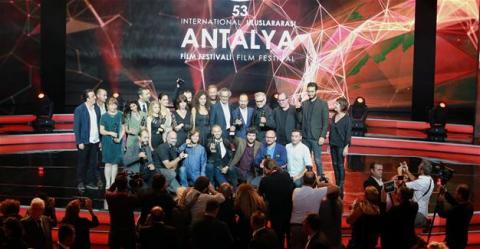 The Lifetime Achievement Awards of the festival were presented to U.S. actor Harvey Keitel and Iranian director Asghar Farhadi.

In the National Competition category, "Mavi Bisiklet" (Blue Bicycle) received the Best Film, Best Script and the Best Director awards. Ümit Köreken, the producer, scriptwriter and director of "Blue Bicycle" said he worked on the film with his wife, Nursel Çetin Köreken, for six years. "I want to dedicate this award to the children who are in need of a bicycle, a pair of shoes and a warm home," he said.

Burak Korucu, the composer of the music of film "Babamın Kanatları" (My Father's Wings), won the National Competition Audience Award. Menderes Samancılar won the Best Actor Award for his role in the same film.
The head of the festival's National Competition Jury, director, scriptwriter and producer Semih Kaplanoğlu, said they watched 12 films in the competition and eight of them were the debut features of promising young directors. "We saw extraordinary acting skills in our cinema," he said.

In the film, 11-year-old Ali is an introverted boy whose father died years ago. Ali works at an auto repair shop during his summer holiday to support his family but dreams of buying a blue bike. However, something...