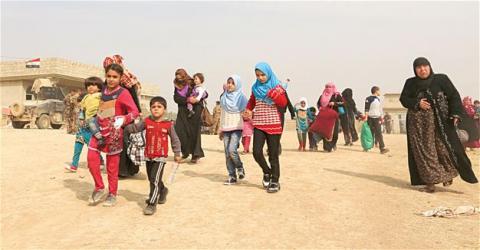 Turkey is considering deploying more troops to the Bashiqa military camp in northern Iraq due to the increasing threat posed by the Islamic State of Iraq and the Levant (ISIL), if the Ankara-Baghdad talks on the status of the camp fail, sources have told the Hürriyet Daily News.
A visiting Turkish delegation presented a draft to Iraqi officials in Baghdad on Oct. 17 where the parties amended some of the articles following proposals by the Iraqi side, Turkish officials said on condition of anonymity.

The agreement will identify the current status and future of the Turkish troops, with Turkey insisting the soldiers remain stationed in Bashiqa until the end of the Mosul offensive. A formula that would bring the status of the Bashiqa camp under the mandate of the coalition forces has long been proposed by Turkey.

The next round of talks between Ankara and Baghdad will be held upon a reply from the Iraqi side.

Meanwhile, ISIL fighters on Oct. 26 kept up their fierce defense of the southern approaches to Mosul which has held up Iraqi troops on the southern front and forced an elite army unit east of the city to put its more rapid advance on hold.

Ten days into the offensive, Iraqi army and federal police units are trying to dislodge the militants from villages in the region of Shora, 30 kilometers south of Iraq's second largest city.

The frontlines in other areas have moved much closer to the edges of Mosul, the last major city under control of the militants in Iraq, who have held it since 2014.

The elite army unit which moved in from the east has paused its advance as it approaches built-up areas, waiting for the other attacking forces to close the gap.

"As Iraqi forces move closer to Mosul, we see...

Over 1,900 terrorists neutralized since beginning of 2021: Minister