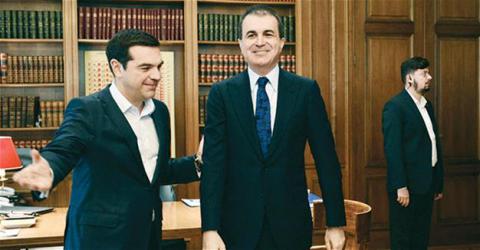 The Fethullahist Terror Organization (FETÖ) might attempt to cause unrest among Western Thrace Turks, EU Minister Ömer Çelik has warned Greek officials during a visit to Athens.

"We know that they are carrying out an activity to divide the Turkish community in Western Thrace. Some of their [FETÖ] members carried out activities there in different manners. I was informed by friends, and we will insist on our sensitivity on this issue," Çelik told reporters on Nov. 3 in a press meeting in Athens.

"They might attempt to carry out more activities in Western Thrace to cause unrest among our compatriots and our community," he added.

The EU minister said he conducted meetings with Greek officials to inform them about the activities of FETÖ in the Balkan region. Çelik said members of the Gülenist organization can go to the Balkan region via Turkey and Bulgaria, and that this was causing concern for Turkish authorities.

"We have a feeling they are carrying out activities in Athens, Greece or elsewhere, especially in Western Thrace region by passing through not just Turkey but also Bulgaria," he said.

Çelik was also asked about the occupation of a construction site for the capital's first mosque in the central Votanikos district by a group of neo-Nazi Golden Down party and other extreme-right groups' members, in what appears to be a concerted effort to block the mosque's construction.

"[The construction of the mosque] became an agenda after a group of racists occupied the site of the construction," he said. "To construct pluralism in a European capital will serve the country's inner peace and social peace. We will never accept activities except the ones which will contribute to the society of that country within the...