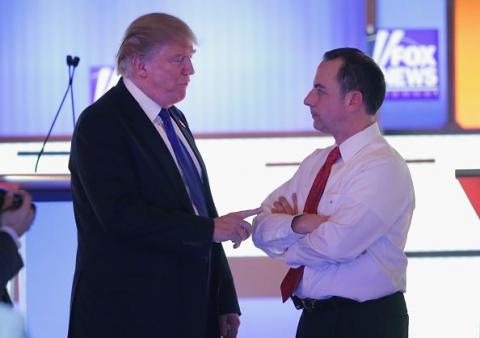 On Sunday, president-elect Donald Trump appointed Reince Priebus, the chairman of the Republican National Committee and a loyal campaign adviser, his White House Chief of Staff.

Greek-American Washington insider Priebus was chosen from a shortlist of names that also included Steve Bannon, the right-wing media boss who took over Trump’s presidential campaign in its final weeks.

The appointment of the Republican National Committee Chairman to such a powerful position suggests that Trump is prepared to seek unity with the Republican establishment in crafting and bringing about his agenda.  While it is believed that this choice will reassure congressional GOP leaders, it could alienate Trump’s anti-establishment supporters, who view Priebus as a deal maker who may press the president towards compromises on such issues as taxes, immigration, trade, health care and the environment.

However, Mr. Bannon was also appointed to a position on Trump’s cabinet — as Chief Strategist and Senior counselor —  signaling an embrace of the right-wing fringe ideology he represents, and a compromise between Trump’s pre-election stance and the more conciliatory tone he has adopted in the past few days.

“Steve and Reince are highly qualified leaders who worked well together on our campaign and led us to a historic victory,” president-elect Donald Trump said. “Now I will have them both with me in the White House as we work to make America great again.”

The transition team in a statement Sunday afternoon emphasized that the two men would work “as equal partners to transform the federal government.”

The 44-year-old former lawyer Reince Priebus, a Wisconsin native, is close with fellow Midwesterners Mike Pence and Paul Ryan, the vice president-elect and House Speaker respectively.  He is also the longest-serving RNC Chairman in the party’s history, a position he was elected to in 2010.

While other Republican party members distanced themselves from Trump’s divisive campaign and frequently outrageous statements, Priebus supported the real estate mogul and developer-turned politician from the beginning, with Trump hailing him as  “a superstar” at his victory speech on election night.

“It is truly an honor to join President-elect Trump in the White House as his Chief of Staff,” Mr Priebus said regarding his appointment. “I am very grateful to the President-elect for this opportunity to serve him and this nation as we work to create an economy that works for everyone, secure our borders, repeal and replace Obamacare and destroy radical Islamic terrorism.”

According to the newspaper Independent:”To many who oppose Mr. Trump’s presidency, Mr Bannon’s appointment will be the more concerning: as the chairman of Breitbart News, the former naval officer and Goldman Sachs investment banker is considered a driving force behind the rise of white nationalism and the so-called “alt-right,” which was emboldened by Mr. Trump’s racially-charged campaign.”