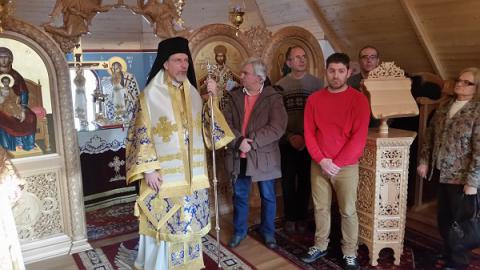 His Eminence Metropolitan Cleopas of Sweden and All Scandinavia presided over the Divine Liturgy today at the St. Nicholas Hermitage in the northern Swedish city of Rättvik, followed by a memorial service for the hermitage’s founder, the ever-memorable Hieromonk Eusebios Vittis. Joining in the serves were the local Metropolis clergy and members of the local Church. The Very Rev. Fr. Alexander Loukatos, Pastor of the Metropolitan Church of the Annunciation in Oslo, delivered the sermon of the day, while Metropolitan Cleopas expressed his hopes and prayers that the hermitage will soon open its doors to house its own devoted and worthy monastic brotherhood.
The previous day, December 3rd, Metropolitan Cleopas officiated the service of Great Vespers.
Following the Sunday Divine Liturgy, a luncheon was offered for the entire congregation, many of whom came from as far as the cities of Stockholm, Uppsala, and Västerås. The annual pilgrimage to the monastery, which celebrates the feast of its patron saint on December 6th, was organized by Ms. Christina Chrysovergi, whom the Metropolitan thanked for her many years of dedication to her spiritual father of blessed memory, Elder Eusebios Vittis, and her multifaceted support of the hermitage’s ministry up through the present day. He also thanked Mr. George Tzanis for the preparation of the meal, which was made possible by the generous support of an anonymous donor in memory of his late brother Nicholas.

Europe’s Far-Right has a Cure for COVID-19: Nationalism

Survey: More than Half of the Bulgarians are Pessimistic about the Development of the Economy after the Pandemic