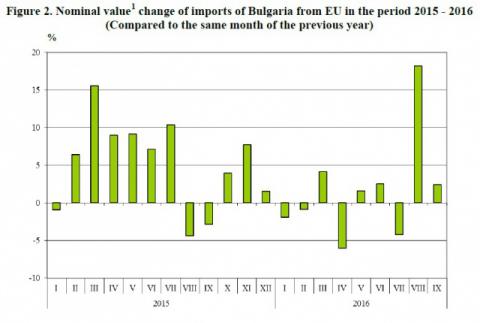 Bulgarian exports to the European Union increased by 6% between January and September compared to the same period of last year, national statistics show.

Exports amounted to BGN 23.0345 B in the first nine months of the year, according to preliminary data of the National Statistical Institute (NSI).

Germany, Italy, Romania, Greece and France where the biggest export partners, making up 64.4% of overall exports to the EU.

The largest growth in exports was posted in the sections of "Beverages and Tobacco" (30.6%) and "Chemical and Related Products n.e.c" (19%).

The most notable fall was in the "Mineral Fuel, Lubricants and Related Materials" section (23.9%).

Imports from the EU increased by 1.5% compared to the same period of last year, reaching BGN 24.5367 B at CIF prices. The largest amounts of goods important from Germany, Italy, Romania, Greece and Poland.

The biggest growth in imports was posted in "Beverages and Tobacco" (12.5%) and the most notable fall was observed in "Crude Materials, Edible (Except Fuel)" (26.6%), according to the Standard International Trade Classification.

The foreign trade balance of Bulgaria (export FOB - import CIF) with the EU between January and September was negative and added up to BGN 1.502 B. At FOB/FOB prices (after elimination of transport and insurance costs on imports) the trade balance was also negative, at BGN 0.3452 B.