Boys come of age in and find solidarity in 'Blue Bicycle' 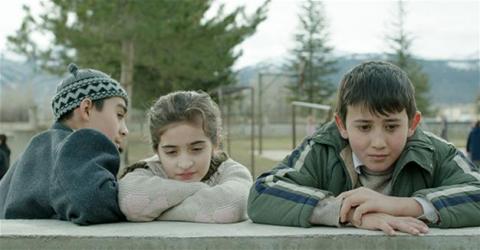 Children have been peering through the screen for the last couple of years in some of the finer examples of Turkish cinema. They are trying to make sense of the adult world, most often appropriating the problems of the adult world to the miniature worlds of their own. The latest example is "Mavi Bisiklet" (Blue Bicycle), the award-winning debut feature of Ümit Köreken that was co-written with Nursen Çetin Köreken.

Living in a small town in Central Anatolia, 13-year-old Ali (Selim Kaya) has already been experiencing the burdens of adulthood, becoming the partial breadwinner for the house after his father's untimely death. He goes to the local garage, working as an auto mechanic to contribute to the household in which his mother is trying hard to make ends meet for him and his sister.

Ali has two things on his mind, as many young boys of his age do. One of them is Elif (Bahriye Arın), the belle of the school, and the other one is the titular blue bicycle he sees on his way to the garage. He saves up the little money that is left after giving his hard-earned income to his mother in the hopes of buying the bicycle one day.

Life might not be easy for Ali, but it is full of prospects and hope. That is, until both prospects come to a halt with the new student at school, Hasan (Burak Vurdumduymaz). Elif's position as the head prefect is abruptly snatched from her when the school principal gives the title to the new boy whose father is able to pull strings beyond the comprehension of the children.

With a sense of justice that is strong and rooted way beyond his years, Ali is adamant that the decision is unjust. He enlists his cousin and best friend, Yusuf (Eray Kılıçarslan), to fight against the injustice, kick-starting an underground...