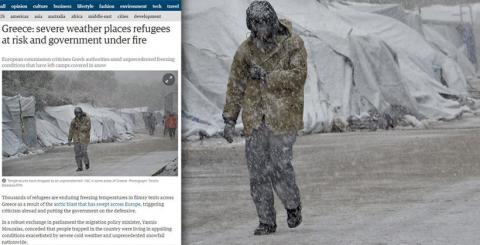 English site Guardian is highly critical of the Greek government in dealing the refugees exposed to arctic weather conditions on the island of Lesvos:
From the Guardian:

Thousands of refugees are enduring freezing temperatures in flimsy tents across Greece as a result of the arctic blast that has swept across Europe, triggering criticism abroad and putting the government on the defensive.
In a robust exchange in parliament the migration policy minister, Yannis Mouzalas, conceded that people trapped in the country were living in appalling conditions exacerbated by severe cold weather and unprecedented snowfall nationwide.
“The situation in the hot spots is very bad,” he said. “Conditions on the islands are awful.”
The government has faced severe criticism over conditions in reception centres, which pose health and safety risks in the depths of winter.
Footage of tents weighed down by snow in the vastly overcrowded Moria camp in Lesbos has elicited particular consternation – and embarrassment for Mouzalas, who only days ago insisted that in light of government preparations there would be no refugees living in the cold. Reports of illness among elderly and infirm refugees have been rife, with agencies attributing outbreaks of pneumonia and flu to the lack of adequate shelter. On Monday the images drew a sharp rebuke from the European commission. “The situation is untenable,” said a spokeswoman, Natasha Bertaud. “But we also have to be clear … that ensuring adequate reception conditions in Greece is a responsibility of Greek authorities.”
Temperatures have plunged to –5C on Lesbos, where authorities have struggled to cope with refugee numbers that surpassed capacity long ago. In other parts of Greece, including the southern island of Crete, the cold snap has seen temperatures drop to an unprecedented –14C. In the Attica region surrounding Athens – where efforts have been under way to place people in rented apartments – sub-zero temperatures were also recorded with snow blanketing ancient monuments.
The unusually cold readings are expected to continue through to Thursday.

On Tuesday, a flight carrying Mouzalas to Lesbos, where the United Nations refugee agency, the UNHCR, is leading efforts to move people into hotels, was turned back because of the bad weather.
“Efforts are under way to move people as quickly as possible into hotels,” the island’s mayor, Spyros Galinos, told the Guardian. “I’ve not seen so much snow, ever. Electricity supplies have been knocked out. There are villages that are isolated, without light or heating or running water. It’s difficult for everyone.”
An estimated 62,000 migrants and refugees have been stranded in Greece following the closure of borders by countries further north and Europe’s deal with Turkey to curb flows last March. About 10,000 of those are trapped on the Aegean islands, including Lesbos.
Although the number of arrivals has dropped dramatically since sea patrols were stepped up, more than 180,000 people have managed to reach Greece since March. Official figures released on Tuesday showed 5,491 refugees on Lesbos alone. Moria, the island’s main facility, was built to house less than half that number. The government’s migration spokesman, Giorgos Kyritsis, said fewer than 1,000 refugees were still living in tents on the islands.
“The burden has to be reduced,” said Galinos. “Refugees have to be moved inland to other centres on the mainland.”
In northern Greece, where the deep freeze worsened at the weekend, the plight of refugees living in tents in abandoned industrial warehouses was further complicated by water and electricity cuts.
NGOs attributed the chaos to the absence of a national response plan, saying despite warnings of bitterly cold weather the state had been woefully ill-prepared.