Mausoleum at Halicarnassus to be restituted 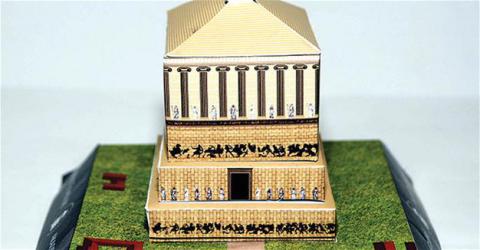 The Mausoleum at Halicarnassus, also known as the tomb of King Mausolus, located in the western province of Muğla's Bodrum district and listed as one of the Seven Wonders of the World, is set to be restituted along with works to open the way from Bodrum Harbor to the tomb have been initiated.

The renowned Danish archaeologist Professor Poul Pedersen and his assistant Professor John Lund have arrived in Bodrum to initiate the works for the restitution project.

The Mediterranean Countries Academy Foundation, which was established in 1993 and headed by Özay Kartal, started working on revealing projects that will shed light on the district's 5,000-year-old history.

In a recent meeting held at the foundation, Pederson and Lund, who work for the University of Southern Denmark, spoke about Halicarnassus and the Mausoleum at Halicarnassus. Among the audiences were Kartal, professional tour guide Semih Adıyaman, underwater archaeologist and Associate Professor Harun Özdaş, architect Dilek Ertem, businessman İbrahim Atalay, photographer Oğuz Hamza and Bodrum Municipality official Filiz Uygun.

Pederson said he would provide his 50-year expertise and scientific support to all works that will be carried out by the foundation for the discovery of artifacts underground and the revival of the Mausoleum at Halicarnassus.

As part of the projects, the eight-meter-long ancient city walls encircling Bodrum and a 3,500-year-old hippodrome will also be unearthed.

Other projects include restoring a Jewish cemetery and a church, organizing the International Heredotus Culture and Arts Festival, illuminating the Myndos Gate, finding the foundation of Heredotus Institute of History, and gathering all ancient artifacts in the peninsula...