Turkish troops to retreat at end of Mosul offensive but camp should be Iraqi: Ambassador 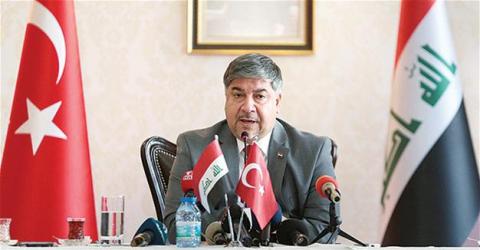 Turkey and Iraq have agreed that Turkish troops will withdraw from the Bashiqa camp in northern Iraq after the end of the Mosul offensive, but Baghdad wants the camp to immediately be turned over to Iraq, Iraqi Ambassador to Ankara Hisham al-Allawi said.

"Both prime ministers have agreed on the key issue of resolving this issue as soon as possible. The two sides have agreed to implement the process of withdrawal of those forces after the end of the military operation to liberate Mosul. We expect that to happen soon. Our prime minister said he expects to finish the Nineveh operation within three months," al-Allawi told a group of journalists on Jan. 11 in the wake of Prime Minister Binali Yıldırım's visit to Baghdad and northern Iraq over the weekend.

In terms of the details of the process, both parties have agreed on upcoming meetings between the relevant institutions in order to agree on details of withdrawal, he added.

However, Iraq is insistent that the camp should run under the authority of the Iraqi government until the withdrawal, rejecting a proposal by Ankara to operate the camp as a coalition base.

"Iraq has made it clear that the Bashiqa camp is an Iraqi camp and it has to be run by Iraqi authorities. We expect to hear form Turkish authorities regarding the details of this process as soon as possible. Prime Minister Yıldırım told our prime minister that he will brief President [Recep Tayyip] Erdoğan and he will report to us as soon as possible," the ambassador stated.

Turkey will discuss the presence of Turkish troops at Bashiqa with Baghdad after the area is cleared of the Islamic State of Iraq and the Levant (ISIL), Turkish Defense Minister Fikri Işık said Jan. 11, adding that the matter would be resolved in...