Ancient Greeks: Gay or not? 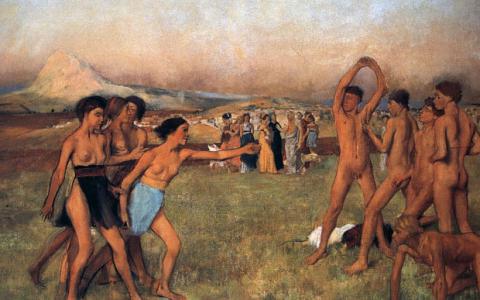 Tomes of books have been written about homosexuality in ancient Greece, and how widely accepted and prevalent it was in mainstream society. Historians’ opinions are partly founded on ancient vases found depicting homoerotic images between males. The reality is that this pottery cases represents a minute percentage of the thousands of ancient Greek items found in antiquity. There can be now doubt that relations between same sex couples were present in ancient Greece, as they were in all civilisations throughout history. But the question of how much mainstream society accepted these, or even condoned them is a totally different matter altogether. One of the misconceptions that has prevailed over the centuries in western literature is the misinterpretation of the ancient Greek word “pederastry” as meaning homosexual activities between a boy and a man. But the actual meaning of the word is closer to “mentorship” than sexual relations. The word in ancient Greece for homosexuality was “kinaidos”, a practice widely shunned and giving rise to great shame to those engaged in such activity, to the degree that men caught having sexual relations could be stripped of their political rights, banished or even put to death. Solon was an Athenian statesman, lawmaker, and poet who was remembered particularly for his efforts to legislate against political, economic, and moral decline in archaic Athens. If the legislations of laws is a measure of societal will and inclinations, then his laws would actually suggest that homosexuality was a shameful and immoral practice to be avoided. According to his laws, any man practising homosexuality was:

banned from becoming a member of the council of nine;

was banned from standing for elections as a priest;

was banned from being a citizen’s advocate;

was not allowed to exercise power in or outside the city of Athens;

was not permitted to be sent an emissary of war;

was banned from expressing his opinions;

was banned from entering public temples;

was banned from being wreathed in races;

was not allowed to enter the agora.

All these violations were punishable by death, according to Solon’s Laws.