Kammenos: Turkey has threatened us in the past (video) 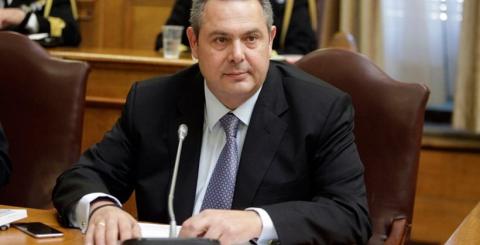 Greek Defence Minister Panos Kammenos said Greece had seen similar threats by Turkey in the past, commenting on Turkey’s warning that it would scrap the EU-Turkey agreement on refugees after the decision by the Greek Supreme Court to block the extradition of 8 Turkish military officers charged with taking part in the failed coup attempt in 2015 against Recep Tayyip Erdogan’s government.

In an interview to Skai TV, Mr. Kammenos underlined that the justice system in European countries did not tow the line the executive branch of power. “Turkey has to understand that in European countries Justice does not follow the line of government. Executive power and Judicial power are independent”, he said. He went on to claim that during his tenure as Defence Minister of Greece, over 400 Turkish military personnel had requested asylum in Brussels. “Turkey cannot expect to enter the EU while at the same time debating on the reinstatement of the death penalty, we can’t have torture, or persecutions going on”, he stressed.

Mr. Kammenos reiterated the government’s official position on condemning the coup attempt in Turkey, but separated that from demanding the officers have a fair trial. On the possibility of a “warm” military incident between the two countries, the Defence Minister reassured the public that every Turkish jet violating Greek air space was intercepted.

On the talks with Greece’s creditors and the current impasse on the second review, Mr. Kammenos ruled out the imposition of any new austerity measures. “We will not take any further measures to cut pensions and wages”, he said. The Minister dubbed the proposal floating on a further reduction in pensions and wages, or the free-tax threshold as “insane”, blasting Germany for acting like a “pimp” from an old 50s movie by continuously raising more and more every day.

“Europe does not belong to Germany. If Germany wants to depart from Europe it van decide to do so”, exploded. He claimed that Greece had fulfilled its part of the deal and now it was time for the creditors to honour their part of the bargain, warning that if they wore not interested Greece could simply leave.

Slovenia make it to semi-finals of Olympic basketball tournament