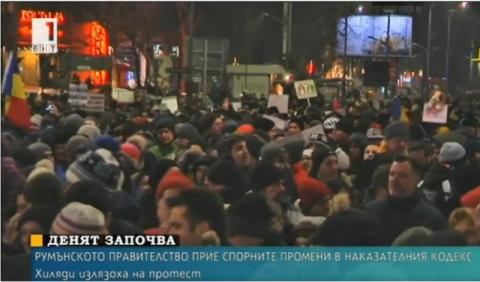 Thousands took to the streets of Romania on Tuesday evening after the government decided to change criminal legislation by emergency ordinance, local media report.

In a cabinet meeting, ministers unexpectedly added the item to the agenda, day ahead of schedule, according to Romania Insider.

The newly adopted legislation redefined "abuse of power", turning any case relating to damages of EUR 44 000 or less wil not be tantamount to a criminal offence.

The development, which will affect more than 2100 cases under investigation, occurred as several former state officials from the ruling Social Democratic Party (PSD), including its current leader Liviu Dragnea, are facing criminal prosecution over abuse of power. Some of their cases are will now not be classified as criminal ones.

The protests included nearly all key cities such as the capital Bucharest, Timisoara, Cluj-Napoca, Sibiu, Brasov, and Iasi.

Participants called for the resignation of the government.

Despite the demonstrations, the emergency legislation was published in the country's Official Gazette at 01:00 local time (EET). Amendments will take effect into ten days.

On Facebook, President Klaus Iohannis condemned the move as a "blow to the rule of law" and has vowed to "do everything" to turn Romania into a country freed from corruption.