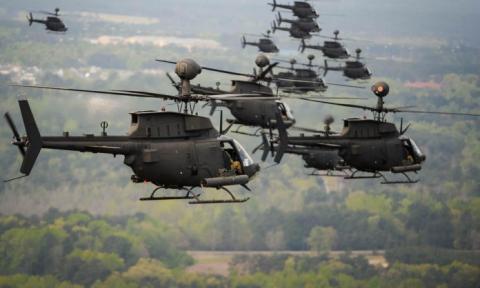 According to information from the Greek defence site ‘Defence-point.gr’ the Greek Ministry of Defence has sent a Letter of Request (LoR) to the US Defense Security Cooperation Agency (DSCA) for 70 retired OH-58D Kiowa Warrior armed reconnaissance helicopters of the US Army.

The acquisition of these helicopters was being prepared for almost three years and the LoR is now finally ready. The Kiowas will come free of charge as they will be given to Greece through the Excess Defense Articles (EDA) program. The only cost will be for the training, spare parts for two years worth of operations, support and their transportation for a total price of $40-45 mil. If they were to be properly purchased they would have cost $294,5 mil.

This development constitutes an important increase of fire-power for the Hellenic Armed Forces as they are well known, combat-proven, reliable, cheep to maintain helicopters with disproportionately big fire-power. In the numbers they are about to be acquired and based on the planning so far, they will cover the relevant needs on the potential theater of operations of Thrace and Eastern Aegean.

The importance of these helicopters is such that the Turkish defence analyst Arda Mevlutoglu described the Greek move as an important upgrade for the Hellenic Army Aviation and as force multipliers they provide a serious operational capability at Thrace and the Aegean, even if half of these finally enter service.

With the current problems in the Greek-Turkish relations the Kiowas come as a blessing. It has been also announced that the next batch of the 15 used Chinook helicopters, also acquired under the EDA program approximately one year ago, will be delivered in the following few days.

According to the same sources, a Follow-on-Support (FOS) contract was signed for the Russian-made A/A SHORADS systems of the Hellenic Army (Osa-AKM & TOR-M1).