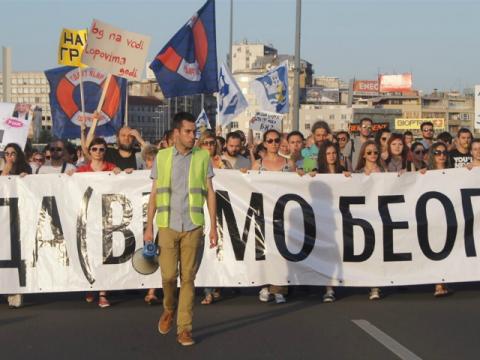 The campaigners will demand the resignation of Belgrade mayor Sinisa Mali.

The protests come after Mali's ex-wife Marija stated that the Belgrade mayor had admitted that he was responsible for the mystery demolitions by masked men in the Serbian capital's Savamala district last year.

Marija Mali told the Network for Investigating Crime and Corruption, KRIK, in an interview published on Monday that that her ex-husband organised the demolitions to eradicate the remaining obstacles to construction of the government-backed Belgrade Waterfront development.

However, she did not provide any supporting material to back up her allegations.

Aleksandar Vucic, the Serbian Prime Minister, said in an interview with Serbian public broadcaster, RTS, that Mali would have to bare "political responsibility" for the  demolitions.

"He is a good manager…but the atmosphere is like that someone has to pay political price," Vucic said on Tuesday.

He once again stated that senior officials in the city were behind the demolitions and that he would be proud on them if they have done it openly during the day, adding however that Marija Mali has been abused for political games.

On the nights of April 24 and 25 last year, about 30 masked men demolished buildings overnight in Belgrade's Savamala district, where the huge government-backed Belgrade Waterfront complex is to be built.

The nocturnal action, which was widely seen as a move by authorities to clear the ground quickly for the project, sparked mass anti-government protests in the capital.