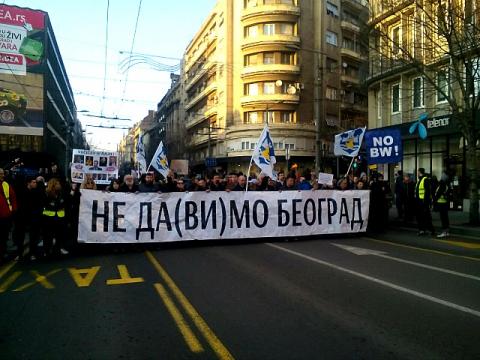 The movement 'Let's Not Drown Belgrade', which has been campaigning against the huge government-backed Belgrade Waterfront complex for years, gathered between five and ten thousand people in the Serbian capital to demand that Mayor Sinisa Mali step down.

"Sinisa Mali must not remain Belgrade mayor … We will not step back, these are our streets," Radomir Lazovic, a participant in the movement, said at the rally.

Vesna Rakic Vodinelic, a law professor at the private Union University who also joined the rally, said citizens were demanding that the prosecution investigate the demolitions and prosecute the perpetrators.

During the march, one of the protesters tore down a placard, held by a man standing on the pavement, that said the protesters were foreign mercenaries. The police and other protesters stepped in to separate the two men and stop a potential brawl.

The demonstrations come after Mali's ex-wife Marija told the Network for Investigating Crime and Corruption, KRIK, that the Belgrade mayor had admitted that he was responsible for the mystery demolitions by masked men in the Serbian capital's Savamala district last year.

Aleksandar Vucic, the Serbian Prime Minister, said in an interview with Serbian public broadcaster, RTS, that Mali would have to bear "political responsibility" for the demolitions.

"He is a good manager … but the atmosphere is that someone has to pay the political price,"...