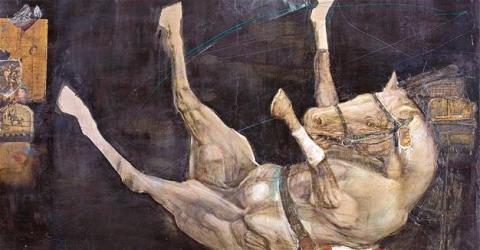 Istanbul's Pera Museum is presenting "Mersad Berber: An Allegory of Bosnia," an exhibition exploring one of the leading representatives of Bosnian-Herzegovinian art in the second half of the 20th century.

Inspired by the masters of European fine arts from the Renaissance to Art Nouveau, Berber's work (1940-2012) infuses expressive powers and intricate talent.

The show, curated by Aida Abadžić Hodžić, Bosnia-Herzegovina's leading art historian, and Edward Lucie-Smith as the exhibition's advisor, showcases the artist's impressions with the likes of Velázquez, Ingres, and Klimt, as well as Yugoslavian painters Bukovac and Jurkić.

A wide array of Berber's works range from the deep, opaque whites influenced by his travels to Bosnia's fairy-tale landscapes to the dark and terrible pits of Srebrenica.

Known for his large canvases and mixed technique, Berber differs from the European masters from whom he derives his inspiration by virtue of his unique themes and innovative approach to composition. Hodžić describes Berber, who reflects in his paintings the full scale of the complexity of his country's multi-layered cultural history, as "the pioneer of the generation of young graphic artists who opened up the local art scene to global trends."

An impressive introduction to the art scene

Berber was a student at the Ljubljana Fine Arts Academy in the early 1960s when he received the Prešeren Award. His works were first exhibited at the Ljubljana Graphic Arts Biennial in 1961, one of the prestigious art events of the period, along with works by the leading graphic artists of the world. Berber's early drawing and prints demonstrated the influence of the academy in terms of technique, and his interest in...