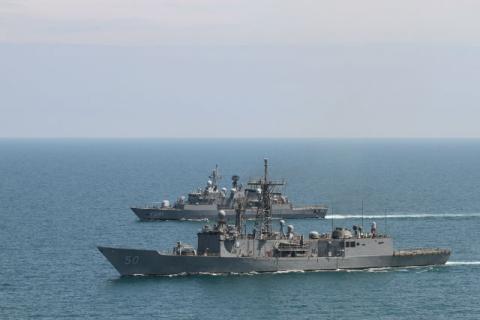 Bulgarian President Rumen Radev has dismissed claims made on Monday by Boyko Borissov, - the former prime minister and leader of the centre-right GERB party - that the country's interim government had damaged the national interest by agreeing to allow more NATO forces in the Black Sea.

On Facebook on Tuesday the President rejected Borissov's claims that, during the NATO summit on February 15-16, the government green-lighted Bulgaria's participation in a permanent Black Sea alliance patrol  - an idea that Borissov rejected last June.

"The planned NATO military trainings in the Black Sea, agreed at the meeting in Warsaw in July 2016, have nothing to do with the so-called Black Sea flotilla," Radev, a former air-force general, said.

He recalled that such training exercises are carried out regularly and that no one has either "allowed" or "banned" them.

The President suggested that Bulgarian politicians were speculating about the issues of joint air-policing and NATO military training in order to score points ahead of the early parliamentary elections on March 26.

"All political forces engaged with the upcoming elections should know that the topic of security does not allow for incompetence and has to be discussed with extreme responsibility," Radev noted.

Despite the President's advice, arguments over NATO are likely to be at the heart of the electoral campaign, with both main parties - GERB and the Bulgarian Socialist Party, BSP, accusing each of breaching Bulgaria's national interests by honouring its commitments as a member of the Euro-Atlantic alliance.

During the meeting of NATO defence ministers last week, an agreement was reached on strengthening NATO's air and land position in the Black Sea region.