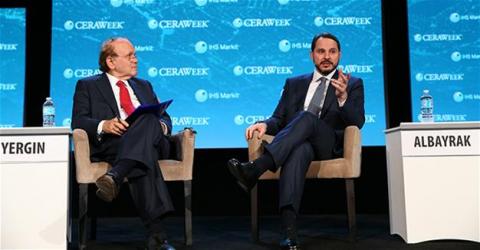 Turkey will begin seismic exploration of oil and natural gas resources in the Mediterranean and the Black Sea this year, Energy and Natural Resources Minister Berat Albayrak has stated.

"We will take steps this year toward exploring and drilling in the Black Sea and the Mediterranean Sea," Albayrak told state-run Anadolu Agency on the sidelines of the IHS CERAWeek 2017 energy conference in Houston.

Barbaros Hayrettin Pasa explored oil and natural gas resources two years ago off the coast of Cyprus, but its activities were interrupted in March 2015 when tensions rose between the Greek Cypriot administration and the Turkish Cypriot government over ownership of the resources.

The Turkish Republic of Northern Cyprus has since stated that the resources of the island belong to both communities.

Albayrak emphasized that more than 60 percent of the world's oil and natural gas resources are in Turkey's region and that the country is entering a new era to "realize new investments by taking significant steps in the energy sector."

He also said he held fruitful talks during the CERAWeek conference with various parties, adding that investors had considerable interest in Turkey.

Over 7.7 mln jabs administered in past week