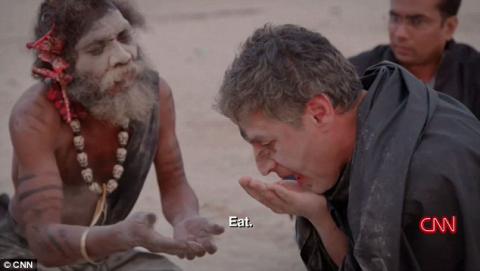 CNN presenter Reza Aslan has been heavily criticized after he ate part of a human brain while filming with a Hindu cannibal sect in India.
The episode, part of a series called Believer with Reza Aslan, was shown on Sunday and provoked horror and dismay from many viewers and an angry backlash by Hindus in America.
Tulsi Gabbard, the only Hindu in Congress, tweeted: ‘I am very disturbed that CNN is using its power and influence to increase people’s misunderstanding and fear of Hinduism.’

The Democrat, from Hawaii, added: ‘Aslan apparently sought to find sensationalist and absurd ways to portray Hinduism.
‘Aslan and CNN didn’t just throw a harsh light on a sect of wandering ascetics to create shocking visuals – as if touring a zoo – but repeated false stereotypes about caste, karma and reincarnation that Hindus have been combating tirelessly.’

Aslan, an Iranian-born religious scholar, was with a group from the Aghori sect when he was invited to eat cooked brain tissue during a ritual.
Aslan, 44, met the Aghori in the holy Hindu city of Varanasi in Uttar Pradesh, where they smeared the ashes from cremated human bodies on his face.
He then drank an alcoholic drink from a human skull, before eating what he was told was human brain.
At one point he fell out with the Aghori guru who shouted: ‘I will cut your head off if you keep talking so much.’
The guru began eating his own faeces and then hurled it at Aslan.
Aslan quipped: ‘I feel like this may have been a mistake.’

He later posted on Facebook: ‘Want to know what a dead guy’s brain tastes like? Charcoal’.
‘It was burnt to a crisp!’
Indian-Americans have criticized CNN for highlights the beliefs of a tiny cult – which has less than 100 members – which has little to do with mainstream Hinduism.

The Aghori are devotees of the Hindu god Shiva and believe nothing can taint the human body. But their beliefs and practices are rejected by orthodox Hindus.
The Hindustan Times reported that the US India Political Action Committee said in a statement: ‘With multiple reports of hate-fueled attacks against people of Indian origin from across the US, the show characterizes Hinduism as cannibalistic, which is a bizarre way of looking at the third largest religion in the world.’

Industrialist Shalabh Kumar told the Press Trust of India: ‘This is a disgusting attack on Hinduism’.
Kumar tweeted: ‘CNN, Clinton News Network has no respect for Hindus. All Hindus worldwide should boycott CNN.’
He also claimed the Republican Hindu Coalition was ‘planning to take major action’.

Then, in an extraordinary outburst, Kumar tweeted: ‘I condemn CNN for airing Believer with fiction. Disgusting attack on Hindus for supporting @POTUS @stephenkbannon @newtgingrich.’
Kumar had previously claimed that 65 percent of Hindus in America had voted for Trump.

Sanjay Puri, chairman of the United States India Political Action Committee, said: ‘We are very disappointed. This is an issue that is of deep concern to the Indian-American community evidenced by the large number of calls/emails we have received.
‘In a charged environment, a show like this can create a perception about Indian-Americans which could make them more vulnerable to further attacks’.
But there is no sign of an apology from Aslan, who seems to be revelling in the controversy.

He retweeted an article by the American Council on Science and Health which was headlined: ‘Why CNN’s Reza Aslan Shouldn’t Eat Human Brains’ and then tweeted: ‘You work all your life for a headline like this.’
But on his Facebook page Aslan, writing about the episode, said: ‘As I repeatedly state on camera and in voice-over, (they) are not representative of Hinduism but are instead an extreme Hindu sect who reject the fundamental Hindu distinction between purity and pollution.’
Aslan, who is himself a Muslim, is the author of several books, including No God but God: The Origins, Evolution, and Future of Islam.