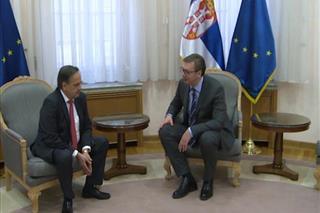 BELGRADE - Serbian PM Aleksandar Vucic and MEP Knut Fleckenstein met on Tuesday to discuss the situation in the region, noting Serbia's role as a factor of peace and stability in the Western Balkans.

Vucic thanked Fleckenstein, vice-president of the Progressive Alliance of Socialists and Democrats in the European Parliament, for the group's support for Serbia's European path, the Serbian government press office said in a statement.

Construction permits in Serbia up 39.3 pct y-o-y in August