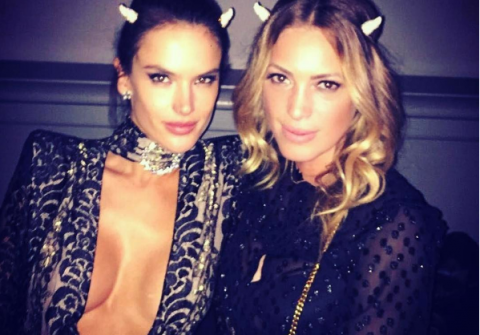 Alessandra Ambrosio proved the world is her catwalk while strolling through New York City on Saturday.
The brunette bombshell had an edgy look with a thick black leather bondage-inspired belt, black combat boots and a pair of dark sunglasses.
Just a day earlier, the Brazilian beauty had posted a super cute photo of herself with her kids, Anja, eight, and Noah, four, in Central Park on Instagram.
In the photo, Alessandra can be seen crouching down, as her kids both lean in to give her a kiss on the cheek, the park and New York City skyline behind them.
In an interview with Net-A-Porter last year, Alessandra opened up about how becoming a mom has changed her approach to modelling.
‘I used to be 100% comfortable on lingerie shoots – then I had a child, and it was more of a mental shift than anything else,’ she confessed. ‘Somehow it felt a bit weirder to be in lingerie once I was a mom.’