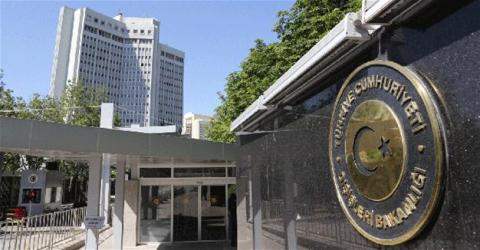 "We find it as worrying as it is unacceptable that the Greek Cypriot side persists on acting as though it is the sole owner of the island and continues with its unilateral activities, particularly in a period when they should be displaying strong political will toward establishing a new partnership with Turkish Cypriot people," the ministry said in a statement.

A delegation from Exxon Mobil and Qatar Petroleum signed an agreement on April 5 with the Greek Cypriot administration to explore hydrocarbon in Block 10 in southern Cyprus.

The statement said it agreed with the Turkish Cypriot side's concerns.

"We share the justified concerns and outrage felt by the Turkish Cypriot side," it said.

"It will be recalled that in the past, we have also repeatedly drawn attention to the problematic nature of activities carried out by hydrocarbon companies in maritime areas over which the Turkish Cypriots have rights," it added.

"Furthermore, a significant segment of one of the relevant areas, namely block number 6, falls within Turkey's continental shelf. Foreign companies shall never, under any condition, be permitted to carry out unauthorized hydrocarbon exploration and exploitation activities in our maritime jurisdiction areas," the statement said.

The agreement was signed while U.N.-mediated discussions were interrupted between the Turkish and Greek sides. The U.N. announced on April 4 that the Cyprus talks would resume April 11 after a two-month hiatus.
In February 2016, the...