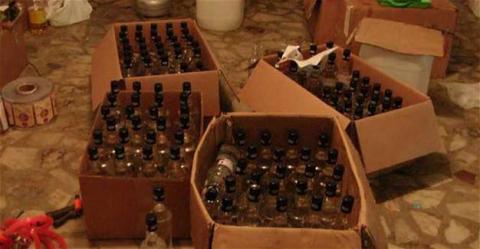 Thousands of liters of bootleg alcohol stored in industrial bottles and ready for delivery across Turkey was seized during the raid.

Turkish media outlets in recent years have reported a rise in alcohol poisoning from bootleg alcohol production. The government currently levies some of the world's highest taxes on alcohol and tobacco, which analysts say has encouraged increased smuggling and illegal production.

In February, police in the Aegean province of İzmir seized at least 40 tons of bootlegged rakı and whiskey and 100 tons of raw materials used in the production of alcoholic beverages, Doğan News Agency reported.

The raid was conducted on Feb. 27 in the Bornova and Kemalpaşa districts, with police officers saying the amount of seized bootlegged beverages was the largest amount to ever have been apprehended.