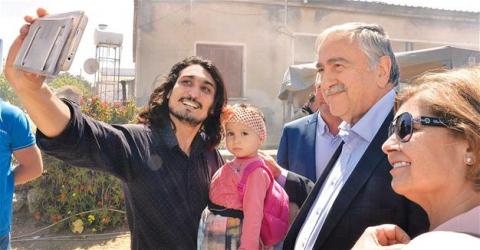 Turkish Cypriot President Mustafa Akıncı has warned Greek Cyprus ahead of a resumption of peace talks that if the natural resources drilling off the island starts before an agreement on the island then there will be new tensions, which he does not favor.

"If [exploring] drillings [of hydrocarbon resources] start before a solution [on the island] is found then there might be new tensions and conflicts instead of cooperation," said Akıncı on April 9 at a local asparagus festival, just two days before the stalled peace talks over the eastern Mediterranean island is set to resume.

"We do not want new tensions and areas of conflicts; we want to benefit from cooperation and wealth jointly. And for that there needs to be a solution," he added.

The Greek Cypriot administration signed new contracts with Exxon Mobil and Qatar Petroleum on April 5, and ENI and Total a day later for licenses to carry out hydrocarbon exploration and exploitation off Cyprus. The companies are expected to start their explorations before the end of this year.

Commenting on the continuation of the peace talks set to begin on April 11 in Nicosia under the auspices of the United Nations, Akıncı urged for reciprocity, underlining their "good will" for the fresh round of unification talks.

"Only if we walk together will this way take us to a solution," Akıncı said.

"No one should expect us to take one-sided steps on the new negotiation process," he said.

U.N.-backed negotiations aimed at reuniting the eastern Mediterranean island came to a standstill in February in a row over Greek Cypriot schools marking the anniversary of the 1950 referendum supporting "Enosis," or union with Greece.