Trump's 'big announcement' on tax to be broad principles: Official 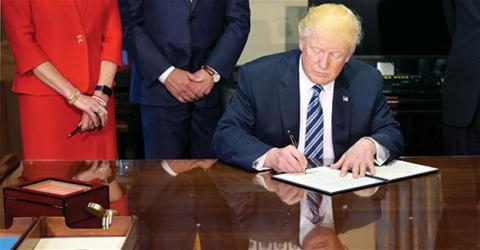 The president unexpectedly said on April 21 at a Treasury Department event that there would be "a big announcement on Wednesday having to do with tax reform."

In a Twitter message on April 22, he wrote: "Big TAX REFORM AND TAX REDUCTION will be announced next Wednesday."

Asked for details, the administration official, who asked not to be identified, said, "We will outline our broad principles and priorities" on April 26.

Trump has struggled as president to advance his domestic policy agenda, including on taxes, even though his Republican Party controls both chambers of Congress. With his 100th day in office only a week away, he has yet to offer any formal legislation or win passage of a major bill he favors.

Most recent presidents had legislative wins under their belts by this time in their administrations.

Under U.S. law, only Congress can make significant tax law changes, though the president often drives the tax agenda by offering legislation. The administration official said, "We are moving forward on comprehensive tax reform that cuts tax rates for individuals, simplifies our overly complicated system and creates jobs by making American businesses competitive."

As a candidate, Trump raised high expectations in financial markets and the business community for changes in the complex, loophole-riddled tax system. In his "Contract with the American Voter," he vowed to work with Congress on tax legislation "within the first 100 days of my administration." The action plan promised large...