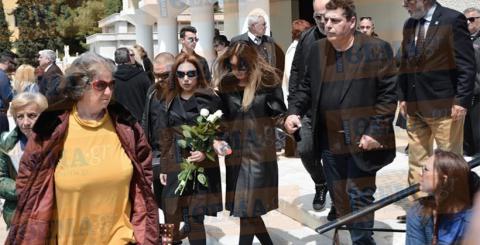 Close family, relatives, friends, artists, fans and ordinary Greeks bid their final farewell to popular actor Stathis Psaltis on Monday at the Zografou cemetery where he was buried. The funeral expenses were covered by the council of Zografou in honour of the beloved actor’s long standing contribution to movies and theatre. Maria, the departed actor’s daughter and his widow Christina, who both stayed by his side till end in hospital, were inconsolable, as the funeral procession moved towards the plot he was laid to rest. The actor passed away on Friday, April 21 after a long battle with cancer. Stathis Pasltis was born in Velo of Corinth and moved to Athens with his family at the age of 11. He studies in drama school and married his first wife Taria Boura, before wedding his second wife Christina Psalti in 2006. The beloved actor starred in many films in the 1980s, as well as theatrical plays.