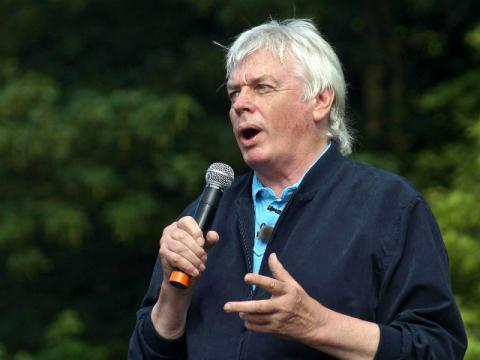 Icke, best known for his theory that a reptilian alien cabal rules the world, praised Serbia for resisting the EU and warned about the alleged power of billionaire philanthropist George Soros.

"I think it is a great thing that Serbia successfully resisted the constant pressure to be pushed into the EU and NATO ... But be careful, the hidden hand is at work in Serbia too. It is everywhere," Icke told the Serbian newspaper Vecernje Novosti, which is organising his visit.

Vecernje Novosti also asked Icke about the Hungarian-born Soros, who is often targeted by pro-government media in Serbia for his support for civil society organisations.

"Soros is part of that hidden, powerful hand that controls both the Democratic and Republican party in the US. His power has not disappeared, he is part of the shadows that rule, not just in America, but other countries as well," Icke said.

Icke worked as a sports broadcaster for the BBC in the 1980s and was at one time a prominent figure in the UK Green party.

Later, he became more known for his often bizarre sounding theories that many of the most important people in history were members of a reptilian race who had come from outer space - and that much of what humans perceive as reality is just a hologram broadcast to earth by these same reptiles.

His numerous books have sold hundreds of thousands of copies. He has also been accused of antisemitism for endorsing the notorious literary forgery, "The Protocols of the Elders of Zion", as well as for questioning some aspects of the Holocaust.