Prayer Ceremony Held in Sofia Due to St. George's Day 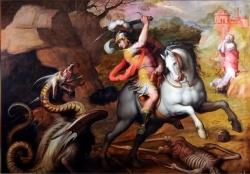 On the eve of May 6 - St. George's Day, also honoured as Bravery Day and the Day of the Bulgarian Army, West - and Central European Metropolitan Antonyi held a festive prayer ceremony at the Sv. Georgi Pobedonosets (Victorious St.George) Church in Sofia, BNR reported.

At the presence of the new Defense Minister Krasimir Karakachanov and high-ranking military personnel the metropolitan prayed to Lord to support the hearts and will of the Bulgarian warriors, in order for the latter to love their motherland and to serve it with honesty and devotion.

Brigadier General Mihail Popov was appointed a commanding officer of the Land Forces earlier through the day with a decree of President Rumen Radev.