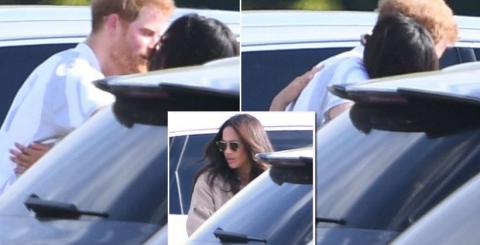 Prince Harry and Meghan have finally sealed it with a kiss. The prince and his American girlfriend Meghan Markle were caught on camera embracing and hugging for the first time Sunday at a charity polo match.
It was the second day in a row Markle showed up to support her prince.
On Saturday, they attended a public event as a couple for the first time, a significant step in their relationship.
Markle stood on the sidelines cheering on the fifth in line to the throne while he rode at the Coworth Park Polo Club in Berkshire, England, to support his charities Sentebale and Well Child at the Audi Polo Challenge. On Sunday Harry was joined by his brother Prince William to raise funds and awareness for their various charities including Tusk Trust, a conservation charity which William is the Royal patron
Markle has started to attend a number of high profile private events with Prince Harry. In March she accompanied him to a wedding in Jamaica for a childhood pal from Eton, the school Harry attended as a teenager.
Harry joined the “Suits” actress over Easter instead of spending Easter at Windsor with his family, indicating just how serious the relationship has become. Markle is expected as Harry’s plus-one at Pippa Middleton’s wedding to Financier James Matthews in two weeks.