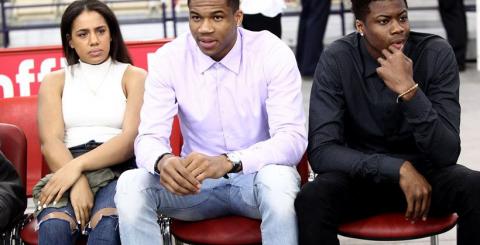 Giannis Antetokounmpo was at the basketball match between Olympiakos and Aris at the Piraeus “Peace & Friendship” stadium for the basketball league and was swamped by fans asking him for autographs. After the Milwaukee Bucks were knocked out of NBA finals, the Greek Freak is in Greece and decided to visit the local basketball league with his girlfriend Mariah and younger brother Kostas. Sitting at the court seats Giannis seemed to be pointing at something while explaining it to Mariah. The NBA superstar personally greeted players on both sides as he plays with many of them in the Greek national team.