Perge mosaics as magnificent as the ones in Zeugma 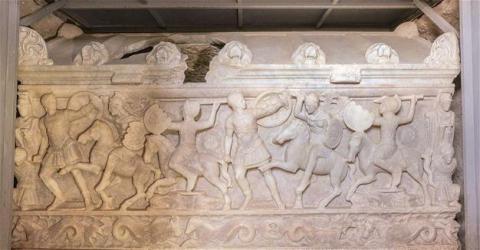 Mosaics unearthed during excavation works in the ancient city of Perge in the southern province of Antalya are dubbed "Turkey's second Zeugma" for its alluring appearance. The mosaics are expected to draw tourists to the region.

Excavations in the ancient city, headed by Istanbul University's archaeology department member Professor Haluk Abbasoğlu since 2003, have brought out mausoleums.

In front of the mausoleums were intact mosaics depicting the goddess of the sea Oceanus, which is said to be the first in Turkey, and Medusa, who is believed to turn all that gazed upon her into stone as well as tombs with various figures.

The tombs and mosaics are being protected by officials, with the help of steel doors and security cameras.

With a new action plan, some fields in the ancient city as well as the tombs and mosaics will be added to an array of tourist destinations.

Antalya Relievos and Monuments Director Cemil Karabayram stressed Perge was a big structure and new investments would be made in the region.

Karabayram said the necropolis (cemetery) field was important. "The field of the mausoleums is known to date back to the 3rd century A.D. We have two very important mosaics that were unearthed in this region. They can be called the most beautiful mosaics in Turkey. They are the only ones in Turkey with the same-term features and same distance as well as their color, tissue and ornamentations," he added.

He said the mosaics were unearthed in 2003 but had not been showcased to visitors yet, adding that after Antalya Governor Münir Karaloğlu's visit to the region, a special action plan began to be prepared in the region.

He added that works had been initiated to reorganize and open some...