Turkey wants a new beginning with US amid YPG row: Erdoğan 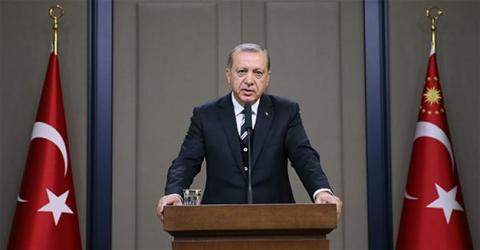 President Recep Tayyip Erdoğan has expressed his wish that his upcoming talks with U.S. President Donald Trump will constitute a new beginning in Turkey-U.S. ties, hoping that Washington will reverse its decision to arm Syrian Kurdish groups that Ankara sees as terrorist organizations.

He will travel to the U.S. on May 15 directly from China, where he will attend an international forum. The first in-person meeting between Erdoğan and Trump will take place on May 16 in the White House.

The Turkish president will also meet representatives of the Jewish community, as well as chief executives of leading American companies during his visit.

Erdoğan's talk with Trump will come after the latter's signing an executive order for allowing the Pentagon to directly arm the People's Protection Unit (YPG), the armed wing of the Syrian Democratic Union Party (PYD), which fights against the Islamic State of Iraq and the Levant (ISIL) as the local ground force. Turkey sees the PYD/YPG as being closely linked to the outlawed Kurdistan Workers' Party (PKK) and has long been pressing on Washington to cease its alliance with the group.

Trump gives TikTok 6 weeks to sell itself to US company

3 men rescued from Pacific island after writing SOS in sand

Turkish pension fund vows to press ahead with investment plans