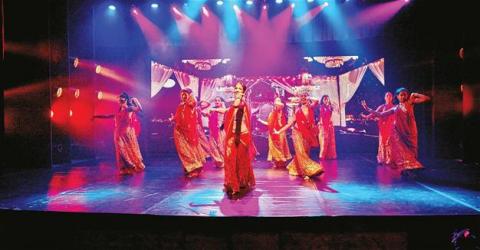 The Navdhara India Dance Theater (NIDT) will perform for the first time in Turkey on May 23 at Istanbul's İş Sanat before appearing two days later at the Mersin International Music Festival.
Founded by acclaimed Indian choreographer Ashley Lobo, NIDT sets out to represent the flow of thought of a new, modern India.

Combining old and new philosophies of movement, NIDT brings modern Indian Bollywood onto the theater stage. Dancers combine a strong Western dance technique with indigenous tools like ancient Indian dance, yoga, meditation and the like to create the feel of a Bollywood movie in a live setting.

NIDT's tours for 2017 include Israel, Turkey, South Africa, Germany and Canada. Ahead of the group's arrival in Turkey, Lobo talked about their amazing show, "Passage to Bollywood."

How did you decide to establish Navhadra India Dance Theater?

There are a lot of companies promoting Indian traditional dance overseas but none that represent modern India. Navdhara's aim is to help overseas audience connect with the more modern part of India. One that is contemporary, now and truly global.