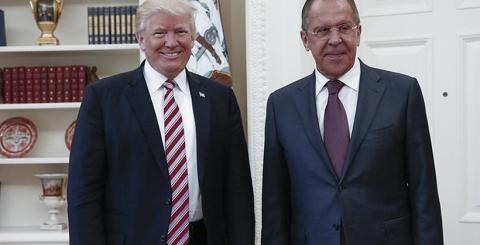 US President Donald Trump has defended his “absolute right” to share information with Russia, following a row over classified material.
Mr Trump tweeted that he had shared “facts pertaining to terrorism and airline safety” and wanted Russia to do more against so-called Islamic State.
He met Russian Foreign Minister Sergei Lavrov in the Oval Office last week.
US media said Mr Trump had shared material that was passed on by a partner which had not given permission.
In his tweet early on Tuesday, Mr Trump said: “As President I wanted to share with Russia (at an openly scheduled W.H. meeting) which I have the absolute right to do, facts pertaining to terrorism and airline flight safety.
“Humanitarian reasons, plus I want Russia to greatly step up their fight against [IS] & terrorism.”
A report in the Washington Post said Mr Trump had confided top secret information relating to an IS plot thought to centre on the use of laptop computers on aircraft.
Mr Trump’s move is not illegal, as the US president has the authority to declassify information.
However, the action drew strong criticism from Democrats and a call for an explanation from his own Republican party.
And one senior Nato diplomat quoted by Reuters said: “If true, this is not going to instil confidence in allies already wary of sharing the most sensitive information.”