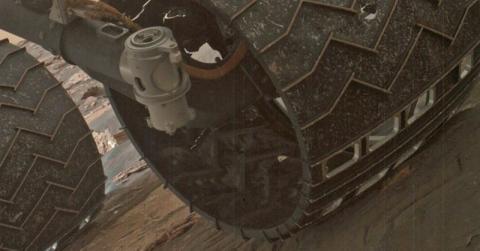 When new discoveries on Mars are made you typically see the name “Curiosity” associated with them, but NASA has another rover cruising around the martian surface, and it just arrived at one of the most confusing places on the planet. The pint-sized rover is now investigating “Perseverance Valley” — a massive gash in the martian surface that researchers still can’t fully explain.

The rover, Opportunity, was launched way back in 2003, and was only expected to carry out its observation and research mission for a few months. Today, over 13 years since it was expected to retire, the rover still functions, and NASA continues to send it on new tours of the red planet.

Opportunity, which is much, much smaller than its car-sized Curiosity cousin, was sent to Perseverance Valley in hopes of shedding some light on its origins. Scientists studying Mars know that the valley was carved by some dramatic force, but with a handful of possibilities including water, wind, and even muddy rocks, there’s still no clear answer. With the rover in place, researchers plan to use its observations to generate a detailed map which will be used to plan the vehicle’s driving route along the rim and eventually into the valley itself.

As with all new information and observations of the red planet, research like this will prove invaluable in planning further robotic exploration of Mars as well the eventual human exploration of the planet, which is currently slated to take place at some point in the 2030s.