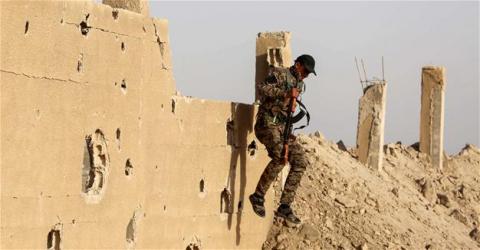 The relationship between the United States and the Syrian Kurdish People's Protection Units (YPG) is a temporary, transactional and tactical one, a U.S. State Department official has said amid Turkey's vociferous opposition to the ties.

"We have not promised the YPG anything. They are in this fight because they want to be in this fight," Jonathan Cohen, the deputy assistant secretary for European and Eurasian Affairs covering Greek Cyprus, Greece and Turkey, said at a panel at Washington's Middle East Institute on May 17.

"Clearly they have their own motivations as well. We are in this common [fight] to defeat a terrorist organization in Iraq and Syria. Our relationship is temporary, transactional and tactical," the State Department official said at the panel on Turkish-U.S. ties.

The panel came one day after Turkish President Recep Tayyip Erdoğan's meeting with U.S. President Donald Trump in the city.

"We have the YPG because they were the only force on the ground ready to act in the short term. That is where it stops," Cohen said.

The U.S. is cooperating with the YPG on the field but Turkey says this should end due to the group's links to the outlawed Kurdistan Workers' Party (PKK).

"I don't think anything that we do with the YPG has anything to do with Turkey's Kurds. You can't solve the PKK issue by eliminating the YPG in Syria," the diplomat said.

"We would like the PKK absolutely out of Sinjar but they don't really control Sinjar. They have a presence there," he said on the PKK's activities in the Yazidi area in Iraq.

The U.S. has provided assurances that weapons to be provided to the YPG will only be used to liberate Raqqa from jihadists and not against Turkey, according to Ankara.