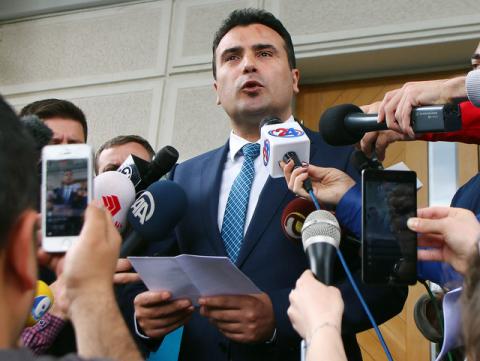 Starting from Tuesday, the Social Democratic leader Zoran Zaev is holding a series of meetings with his coalition partners from the three main ethnic Albanian parties to align their stances on the future ministers in his cabinet.

On Monday, Zaev confirmed he was ready to start final talks about the ministers and sounded optimistic about the outcome.

"I am satisfied by the dynamics of the talks thus far," Zaev said, adding that he would do his best to wrap up talks as soon as possible. Zaev said this while in the western mainly Albanian town of Tetovo, where he met some of his political allies.

Zaev is to meet representatives of the Democratic Union for Integration, DUI, the Alliance for Albanians, as well as members of Besa, which is the only party that has not yet clarified whether it will join the new government or just support it in parliament.

Unnamed sources close to the new parliamentary majority told Radio Free Europe on Monday that while talks thus far have focused on the distribution of ministries between the parties, they have not tackled the issue of proposed ministers themselves, which is expected to be the final issue on the table.

Sources said the talks might even wrap up by the end of this week, in which case Zaev would be able to submit his proposed government to parliament, so that MPs can vote on it next week.

Together with the three Albanian parties, Zaev's Social Democrats, SDSM, control 67 of the 120 seats in parliament.

Macedonia has been without a new government since the December 11 early elections, which it was hoped would end a long-lasting political crisis, centring on allegations of widespread wiretapping and corruption by the previous government led by the VMRO DPMNE party....