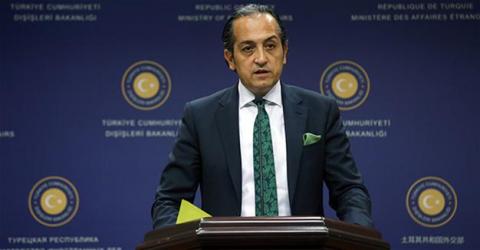 Turkey's Foreign Ministry has rejected a resolution by senior U.S. lawmakers condemning a street brawl between protesters and Turkish security personnel outside the Turkish ambassador's residence in Washington.

"We reject the resolution in question," he said in a statement on May 25.

The spokesperson reiterated Turkey's argument that the incident that took place in front of the Turkish ambassador's residence during the visit of President Recep Tayyip Erdoğan to Washington, stemmed from U.S. authorities' refusal to take necessary security measures, despite repeated official warnings.

"There is no answer to the question why the U.S. authorities did not take tight security measures in front of the ambassador's residence as they did at other stages of the visit. Likewise, no explanation has so far been provided for the incident that took place afterwards in front of the Chancery, which was caused by the extreme and aggressive actions of the U.S. security authorities and was officially protested by our ministry," read the statement.

Continuing to push the resolution through the legislative process will not help settle the matter, said the spokesperson, adding that Turkey would like to retain hope that the developments regarding the matter, which Ankara will be following closely, will not overshadow the visit which was "considered productive."

On May 25, The House Committee on Foreign Affairs approved a non-binding resolution condemning the violence by Turkish security forces during Erdoğan's visit on May 16.

The resolution was led by House Foreign Affairs Chairman Rep. Ed Ryce and supported by...