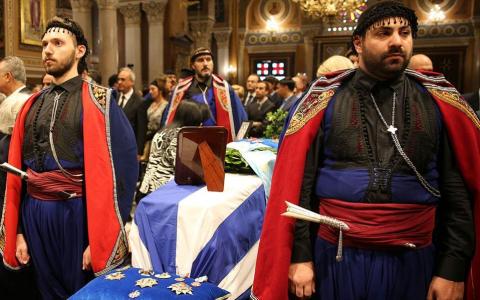 Hundreds of mourners gathered in central Athens Wednesday to pay their respects to Constantine Mitsotakis, the former conservative prime minister who died this week aged 98.

Greek Prime Minister Alexis Tsipras, Cypriot President Nicos Anastasiades, and Greece's 76-year-old former king, Constantine, were among mourners filing past his coffin at Athens Cathedral on the eve of his funeral on the island of Crete.

Mitsotakis served as prime minister between 1990 and 1993. Although he was considered by some of his political opponents to have been a divisive figure, the government declared four days of official mourning.

Supporters credit him with advocating fiscal restraint years before Greece was hit by severe financial crisis, but critics said he contributed to a highly charged political atmosphere in the late 1980s.