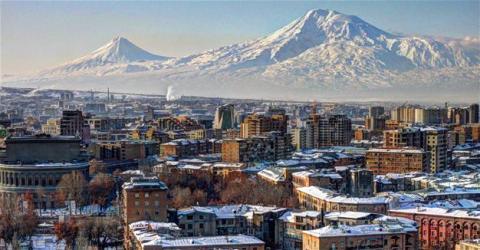 You pick up "Fleeting City" by Hovhannes Tekgyozyan with quite a bit of anticipation. The short novel promises something unique, billed as a taboo-breaking work by an important voice in a new generation of Armenian authors. Tekgyozyan is an award-winning writer, actor, and playwright, and "Fleeting City" is described as a kind of movie-novella, combining humor, mysticism and grotesquery.

The narrative centers mainly on Gagik and Grigor, two young men who appear to narrate a trip out of the capital Yerevan to Lake Sevan with a visiting Turkish traveler. The details of these characters are refracted through a bewildering prism of phantasmagorical impressions past and present. Scenes cut and shift abruptly, glimpsed through a dizzying array of perspectives. Tekgyozyan's experience as a screenwriter is clear from the almost cartoon-animated quality of the description, at times like an animation on paper.

The impression is like a fever dream, where reality and fantasy are blurred beyond recognition. The grey and conflict-ridden landscape of post-Soviet Armenia is enriched with surprising, colorful imagery. Proustian reveries are provoked by the characters' sensory experiences; time frequently collapses in on itself; motifs swirl in and out of the narrative. There is a kind of synesthesia at work, as the boundaries between senses become ineffable and ultimately evaporate.

Tekgyozyan leaves behind the themes of corruption and economics probed in more traditional Armenian novels. But does his cocktail of virtual reality, sexuality, suicide and drugs say anything original?

Protests over police killings rage in dozens of US cities